Cheers to all Mothers

Here at dough, we support women’s empowerment & equality in the wine and culinary worlds and beyond.  In fact, we dedicated our Cabernet Sauvignon to the all of the compelling, bold & inspiring female leaders we are a catalyst for good for. And who are some of the most inspiring & powerful? Mothers.

Many think of Mother’s Day as a day to take our mothers out to brunch or perhaps prepare a breakfast in bed and deliver it along with a bouquet. We wanted to take this holiday to highlight the hardworking women of the restaurant industry, many of them mothers.

One thing that is true for working women in any industry is that finding reliable childcare can be a challenge. For women working in restaurants, it can be even more challenging given the non-traditional hours many of them work. For those without a partner or nearby family, this is even more difficult.

From a blog post from our partners at the James Beard Foundation:

“The pandemic has only exacerbated the rate at which women are leaving the workforce to be primary caregivers. Women started 2020 roughly equal to men, holding 50.03 percent of jobs. But by year’s end, they held 860,000 fewer jobs than men—a gap underscored by sharp losses in hospitality. This decline has adversely impacted Latina women, who have the highest unemployment rate at 9.1 percent followed by Black women, at 8.4 percent. 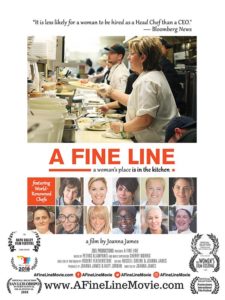 These disparities have created a system in which, according to our friend Joanna James in her must-see film, A Fine Line, is in large part why less than 7% of head chefs and restaurants owners are women.  The film features the perspectives and experiences from world-renowned chefs, including: World’s Best Female Chef Dominique Crenn, Emmy Award Winning TV Host Lidia Bastianich, Two Michelin-starred Chef April Bloomfield, One of Time Magazine’s Most Influential People Barbara Lynch, First Female Iron Chef Cat Cora, World’s Best Chef Daniel Humm and many more.

Beyond these famous names, the film follows the personal story of a small town restaurateur with a larger than life personality, Valerie James. A single mother on a mission to do what she loves, while raising two kids and the odds stacked against her. An uplifting American success story about perseverance, family, and food.

The stories will inspire you, but will also convince you that meaningful change is needed to create a more level playing field for more women to get into leadership.  Learn more by following @afinelinemovie.

Luckily, through her 501c3 non-profit MAPP, Joanna has some ways that we can all help.  Chief among them is advocating for affordable and accessible childcare as well as supporting the FAMILY Act.

The FAMILY Act would create an affordable and self-sustaining national family and medical leave insurance fund to provide workers with a portion of their wages for a limited period of time (up to 60 workdays, or 12 weeks in a year) to address their own serious health condition, including pregnancy or childbirth; to deal with the serious health condition of a parent, spouse, domestic partner or child; to care for a new child; and/or for specific military caregiving and leave purposes. The FAMILY Act’s wage replacement rate builds on lessons from state paid leave programs in California, New Jersey and Rhode Island to help ensure that caregiving time is affordable for lower-wage workers. FAMILY Act benefits would be portable. As long as a worker has paid into the system and is engaged in eligible caregiving or has a serious illness, then s/he could receive FAMILY Act benefits, even if s/he earned the benefits while working or living in another state or for another employer.

What else can you do?

Shipping Included on Your First Order...

when you Rise to the Occasion with us! Let’s keep in touch via email:

You must be 21+ years of age to enter this website.

I agree that I am of legal drinking age.